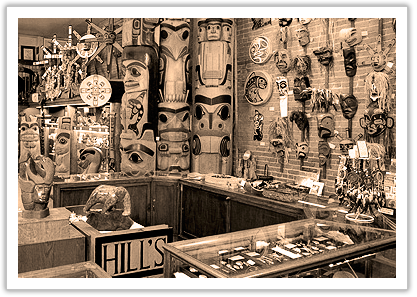 The story of Lloyd and Frances Hill began in 1946 when they first
acquired the Koksilah General Store and Post Office. Koksilah
(pronounced coke-sy-la) is a small community on the East coast of
Vancouver Island, just one mile south of Duncan.

During the early years, the Hill's created an outlet for the local
Native artists who were encouraged to display and sell their work.
As time passed, visitors to Koksilah became aware of the Hill’s
reputation and their unique art so word spread across the country.
As the Hill family business expanded, new stores were opened on
Vancouver Island in Victoria, Nanaimo and Campbell River. Hill’s
flagship store was opened in Vancouver’s Gastown district in 1975,
before moving it to the up-and-coming community of Mount
Pleasant In the fall of 2017.

With three outlets in British Columbia, Hill’s Native Art acquired the
largest and most varied collection of First Nations and Inuit arts
and crafts. Hill’s caught worldwide attention as the largest
Northwest Coast Native Art Gallery in North America, and has
exhibited hundreds of works by emerging and internationally
renowned artists. At any given time, Hill’s had featured over 1200
Native artists and represents every Nation of the Northwest Coast.

In 2020 Hills Native Art began the process of winding down
business to allow the Hill's family time to relax and work towards
going into well-earned retirement. Most notably Dorothy, who took
over from her Mother, Francis, in the 80’s and has dedicated her
life to overseeing the management and success of all of the Hill’s
stores since.

This year (2021), Hills has began selling exclusively online as we
continue to downsize and sell the remainder of our stock as part of
our Retirement Sale.

ART ON LOAN
Hill's will loan artwork for movies, props and off-site events for a
nominal fee, and rental fees are considered a deductible business
expense. Contact us for more information. 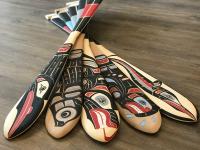